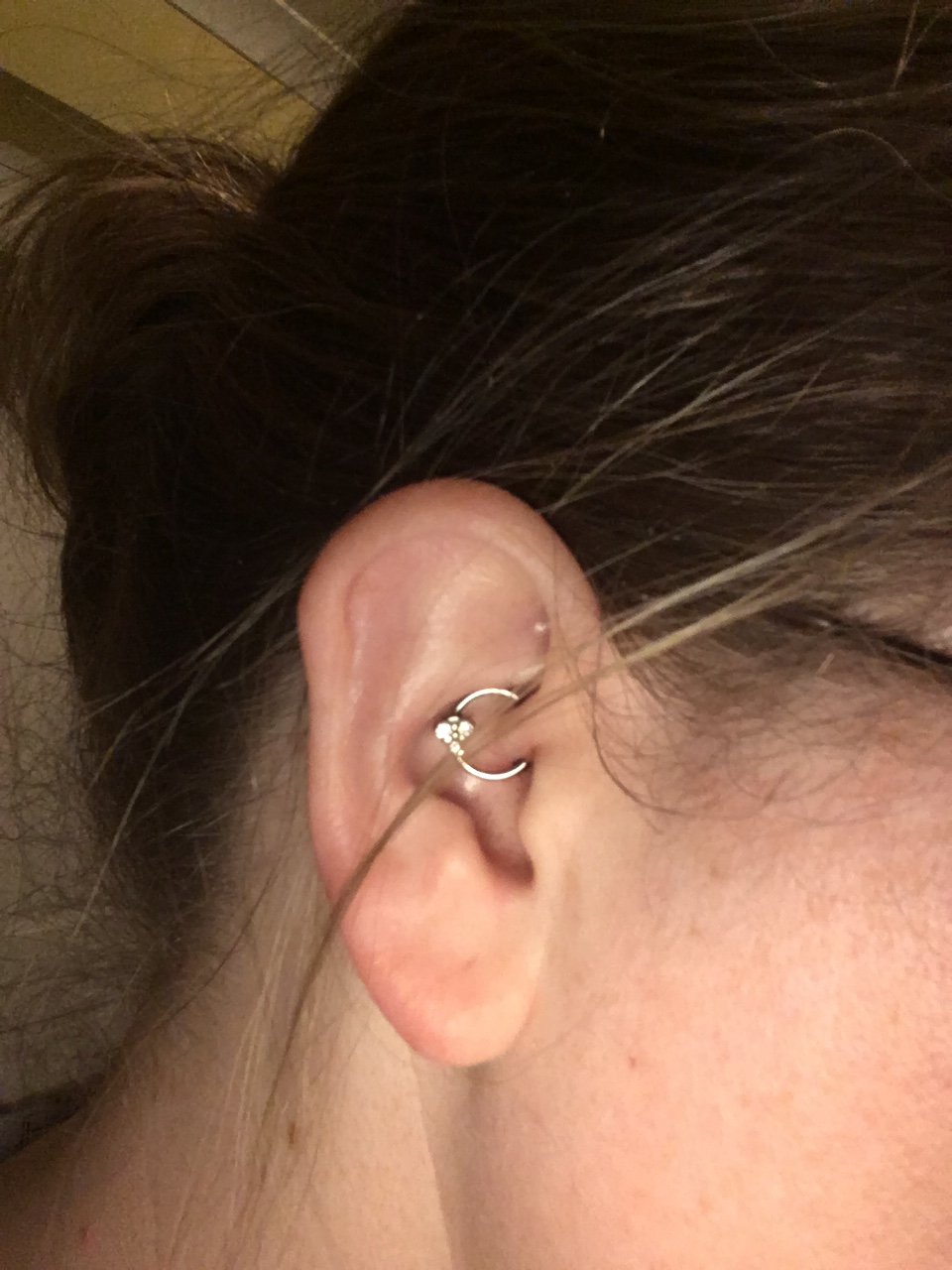 On Saturday I got a Daith piercing, this is a piercing which is rumoured to help relieve migraines. It pierces the innermost cartilage fold of your ear.

There is no medical evidence that it works. The Migraine Trust have a comment on their website saying this trusted neurologist from Dr Fayyaz Ahmed. However, many websites and people in the community of sufferers seem to believe it has helped them (Example).

Maybe it is acupuncture, maybe it is placebo or maybe there is a science we do not know. However, when you are suffering migraines for several days a week and none of the medications seem to be working, maybe it is worth trying.

I searched for a reputable piercing establishment with not only good reviews in general but for this piercing in particular. I found a shop in Reading, far enough from where I teach to not bump into a student and also with good reviews. Urban Piercing, I would recommend them if you are looking for someone too.

I booked an appointment…although nervous about the pain. I have not had a piercing since I was twelve and I was having the lobes pierced. That is all tissue so a completely different experience, yet I remember that not being too much fun. I remember being nervous and worst still having to experience the pain twice, at least this time it is just one side.

I took a friend for moral support and arrived to have the piercing. I chose to upgrade the jewellery to something a little prettier, being that once this is in it is unlikely to be coming out again.

The piercer was lovely and he put me at ease. We chatted as he thoroughly cleaned my ear, marked the spot and prepared. Then I laid down and waited… I admit it hurt but not as much as I thought it would. It was more like pressure and some uncomfortable pain than a sharp pain I had expected. After a little bleeding and more pressure as the ball was put onto the ring and it was done.

At this point I will also note that the Shed cafe next door is excellent and I felt I had earned some cake and tea after this. We loved the environment and the vegan chocolate slice cake was so amazing. It was just the reward I needed.

It will take a three to six months to heal as it is cartilage. I also need to kept it as clean as possible to prevent infections. I also cannot sleep on that side until it is healed. So it does take extra care while it heals, like any piercing.

I am also not expecting an instant cure. I will have to monitor how things go and get back to you. I actually think if nothing changes then I have a prettier ear and if it helps then that would be a great bonus. I felt it was worth trying if there is even the possibilities of less migraines in my life in this mental world.

It is 3rd February and Veganuary is over. I have actually been a vegan for longer, I did not start it this month but back in the autumn and will be continuing it. However, I did think it was a good time to review how it was going.

Maybe I should start with why I am vegan. Like many people I did it for many various reason; mainly the animals, the environment and my health, not necessarily in that order. All of these were important but I chose to do it now, as I can.

I have wanted to be vegetarian for a long time. I did do it for a little while when 12 years old but was branded a ‘fussy eater’ and it singled me out when I was already being singled out through the scapegoating and bullying. Then was told it was the reason that I was anaemic. I listened and so I stopped and ate meat again.

Then as an adult, I felt due to my citrus allergy and lack of self-worth that I could not make the choice. This choice does affect the people around me; dinner parties, lunches and cafe visits, it just make things different. To be able to say ‘I choose this’ takes a voice, that I just did not have. Especially as this is a choice, unlike my citrus allergy and I still felt inconvenient for having that.

Over the last three years I have been gaining my voice and getting loudly. Then I have my sister-in-law who is also vegan and supported my decision. I opened my eyes to the very many reasons to be vegan; I watched Cowspiracy, What the Health and Earthlings. I have also looked at the other arguments that these are exaggerated and a load of rubbish. I am a historian after all, so I have to know both sides to each story. The problem is that both sides have motives to argue to their point. There seems to be no neutral ground on which to see both sides.

All I can say is what I know from my experience. I am not in a clinical study or creating one, but I can say that usually this time of year my Fibromyalgia is in flare up mode. The cold weather has usually increased my pain by now and that just hasn’t happened. I am on the lowest pain medication I have been on for years and although I have symptoms they are mild. I have no explanation for this except I have gone vegan. It could be I am getting better at managing the condition but I just do not think that is true. There are studies that state that dairy has inflammatory properties and some that say it doesn’t. Usually dairy versus non-dairy studies and I have no test results, just my experiences.

So what do I eat? This is the most common question I get, even though the ‘healthy plate’ we teach the students does not consist of just meat and dairy. However, it does take a change in the way I think about cooking. It means changing a few of the staples in my cupboard and swapping some items. I now have a lot more lentils and beans in my pantry. I have swapped to non-dairy cheese, butter and am also well-informed on ‘accidentally vegan’ products.

I bought several vegan recipe books and tried out a few new recipes. Although, I had lots of my own recipes. Before being vegan I was mostly vegetarian at home, so I could make a few switches and carry on as before. Often making pastas, risotto and rice dishes with a mixture of vegetables and sauces. I have also used The Vegan Kind Online Supermarket and followed lots of vegan social media groups. All these have been so useful to find out lots of tricks and tips.

The one thing I miss is pizza, but there are even alternatives for that.  Due to this being Veganuary lots of restaurants have been making adjustments to their menus. I am able to order pizza from Zizzi’s or Pizza Express. I can even have them delivered with the help from Deliveroo.

Other cuisines have also adapted. Top of the media headlines has been Greggs, who introduced a vegan sausage roll. Which I found almost too strangely close to the real thing. I hope the availability of plant-based foods continues as Veganuary becomes a memory and the rest of the year takes form in this mental world.